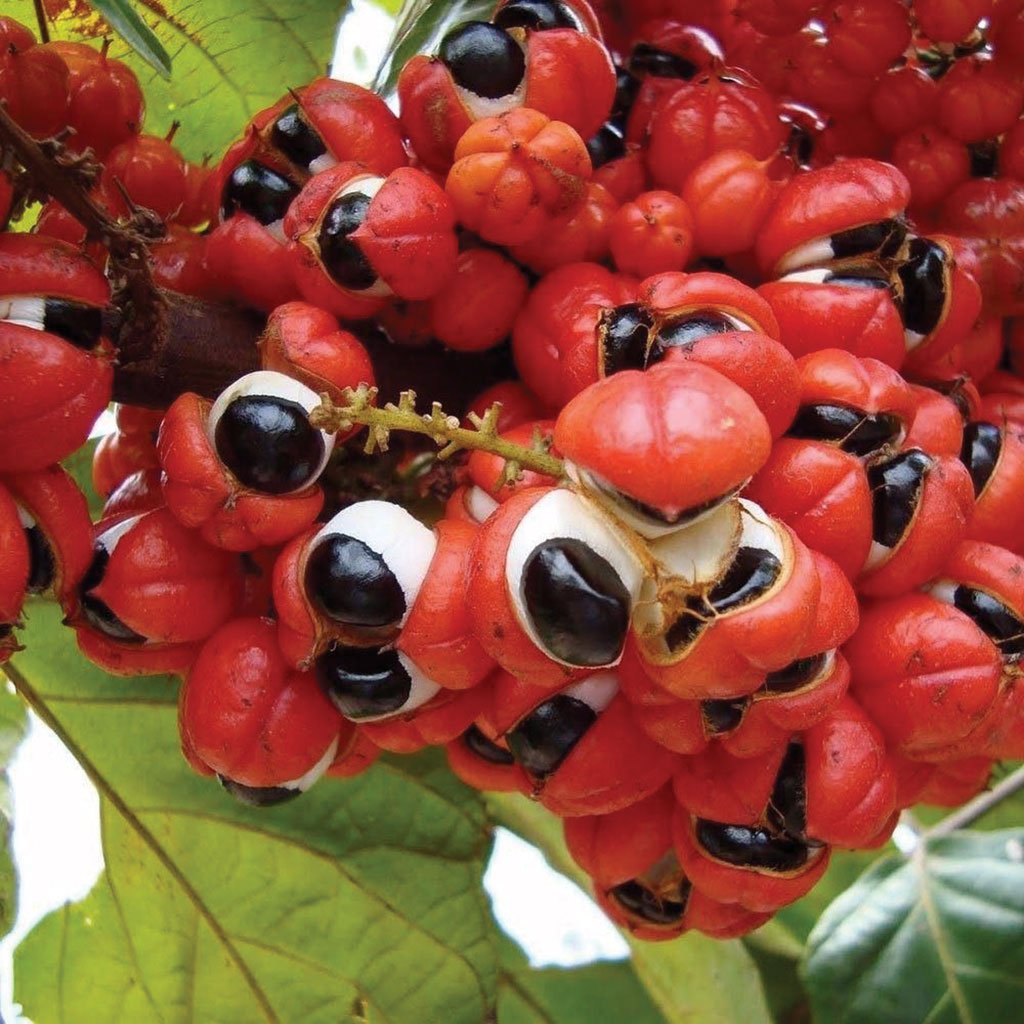 Guarana is a climbing plant that grows in the area of Venezuela and northern Brazil, and is sometimes referred to as Brazilian cocoa.

The guarana fruit is about the size of a coffee bean and has an orange-red skin. When it matures and opens up, what is usually seen is a black seed surrounded by a white layer, and the visual effect is quite striking because it looks like an eye.

Among the locals there is a myth about guarana which they connect with the specific appearance of the fruit. One of the myths tells how the evil spirit Jurupari lured a young boy villager into the jungle and killed him out of jealousy. Because the family and villagers greatly mourned the boy, the great Indian god Tupã decided to comfort them, so he advised them to plant the boy’s eyes in the jungle and from them a wonderful plant will grow, one that will cure a lot of diseases and will be of great benefit. After they had obeyed, they called the plant guarana, which in their language means “fruit like human eyes.”

Brazilian natives use guarana powder even to this day as a medicinal product and consume it in small doses since childhood, together with their mother’s milk, so it is an integral part of their diet. They associated their longevity with guarana, which they call “the elixir of long life”. Guarana is considered one of the most useful plants in the Amazon jungle.

The efficiency of guarana comes from the fact that its seeds contain a significant amount of caffeine – about two times more than in coffee. It was extremely helpful to Brazilian tribes because it made them able to withstand the long and physically demanding excursions through the jungle. Due to the high content of caffeine, guarana acts as a natural stimulant. It is claimed that it has a longer-lasting effect than coffee or tea, which may be related to the interaction of its caffeine with other substances present in the plant, for example. tannin. The caffeine from the guarana is released much more slowly, which also increases its stimulating effect compared to other drinks with caffeine.

Usage: The recommended daily intake is at most half a teaspoon (1-2g), which is dissolved in a glass of water, milk, smoothie, juice, etc. As with all high-caffeinated products, guarana should be consumed in moderation.

Side effects associated with excessive use include insomnia and high blood pressure.

It is not recommended for children, pregnant women and lactating women.
Composition: 100% organic guarana powder